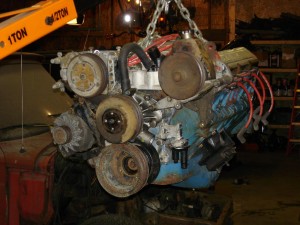 Got quite a bit done this weekend… I stripped down the front of the motor to check the timing chain, and replaced the water pump  and thermostat when I built it back up.  I borrowed pretty heavily from the 360 sitting in the J-truck project vehicle but Fraser also provided some key parts (thanks Fraser).  After inspecting what looked like a new timing chain as well as the condition of a lot of the other parts on this motor, it’s pretty clear to me that this engine was built but never fired up.  Could be the deal of the century or a colossal waste of time.

One of the features I’ll eventually be adding to the Jeep is onboard air, using the prized externally-lubricated York A/C compressor that came on my junker Wagoneer’s 360.  The compressor bolted in place on the 304 using the brackets from the 360.  Finishing that is pretty far down on the list… at least past the “get it driveable again” item.

Since the Wag’s 360 was set up for A/C, it had triple-set pulleys on the water pump and crankshaft.  All the engine accessories, including the power steering pump, also had double pulleys.  I’m planning on running two belts around the power steering pump to hopefully cut down on slippage and noise.  One belt should suffice for the alternator and onboard air.  If not, I can easily change it later.  I should also have enough parts left over from the 304 to build the 360 back up into a non-A/C configuration.

The immediate to do list includes getting some fine-thread bolts for the water pump pulley (I’ll still be running my electric fan), putting new belts on, then dropping the motor back into the engine bay hopefully for the last time.  At that point I’ll be addressing the transmission and exhaust placement issues.  I’ve gotta say it was a lot easier getting everything mounted on the front of the engine with it on the hoist instead of in place under the hood.

Frank Struwe recently sent me quite a bit of information on how he built his PTO ice cream maker, so look for that in “Projects” in the coming weeks.  Also, photos from Flat Nasty will also be online as soon as I get ’em! 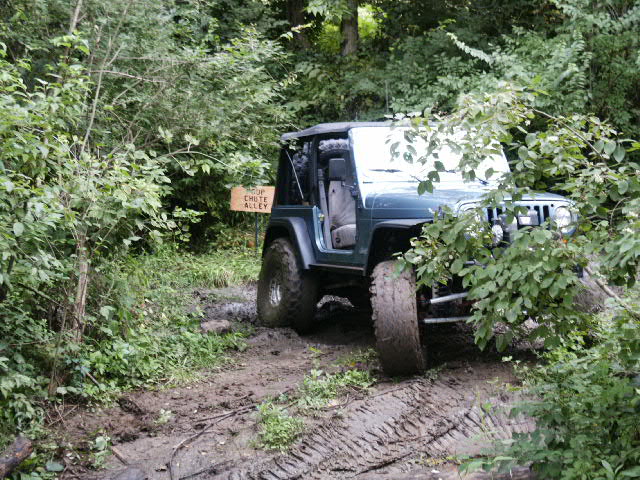