I got up early and went over to campus to pick up the camera gear.  After breakfast with the crew, we got the camera mounted up on the passenger side of the Jeep and headed down to Washington Street in Peoria.  The plan was to use the stretch starting at the southern edge of the downtown area extending to the end of Washington where it joins up with Adams.  Along with Frank and Jon, Carrie and her friend Jessica tagged along to offer extra hands, transportation and to shoot some behind-the-scenes photos and video.

We met up at the former Hardees at the base of the Cedar Street Bridge, and I climbed into the back of the Jeep.  Frank and Jon were miked up and we went on our first “dialogue run” with me crouched down in back listening to delivery while watching on a portable monitor.  About an hour later we had enough good takes to patch together what we needed for several scenes.  Carrie and Jessica got some great behind the scenes shots and also chased down the lighter Jon threw out the window.

Carrie and Jessica went home for a bit while we soldiered on, moving the camera to the driver’s side then finally to the front of the Jeep.  For each camera position we did a complete read-through of the dialogue so I would have options later when editing.  Although I did have a specific sequence of shots I wanted to follow from the original movie, it’s safest to shoot a scene several ways in case it just doesn’t work out the way you planned.

After lunch at the Dream Hut in Bartonville, all five of us headed back to Washington Street to shoot some drive-by’s and other shots we needed for the opening segment.  All of them turned out well, but shooting various takes of the bridge crossing proved to be time-consuming.  Even if all I needed was a shot of the Jeep taking off from a traffic light, Frank had no choice but to cross the entire bridge before he could turn around and come back for another run.  Everyone was very patient though, and we got both primary and safety takes for every shot.

A few trivia notes: The action is supposed to take place at the Cedar Street Bridge, but that bridge does not have room for (or allow) pedestrian traffic.  So while we shot as much as we could at Cedar Street, the pass-by shots on the bridge itself were done on the Bob Michael bridge, which does have a pedestrian walkway.  Only sharp-eyed viewers will notice.  Also, to increase the apparent climbing and descending angles when shooting on the Bob Michael (which in actuality has a very slight climb to the peak), I tilted the camera.  Poetic license.

Passers-by were enthralled with the whole operation, especially when we were working in our “staging area” in the old Hardee’s parking lot.  McArthur and Washington is a pretty busy intersection, so people pulled up and stared at the Jeep, the camera rig, and Jon and Frank in their Jake and Elwood costumes.  A cabbie stopped to see what we were shooting, and was thoroughly confused when I told him it wouldn’t be on TV or the Internet.  In the 8 times Jon and Frank went over the Bob Michael bridge, they made friends with a couple walking over it, waving to them each time.  I learned later that Carrie Cordell actually saw me on the bridge with the camera that day, but luckily she missed seeing Frank and Jon in the Jeep all decked out as the Blues Brothers or the cat would have been out of the bag.

It really wouldn’t be an MIJC shoot without some kind of mechanical problem with my Jeep, and today was no exception.  The Jeep began the day by listing strongly to the passenger side, which we initially thought was just the weight of the camera mount but it continued to do it even after we removed the camera.  Frank and Jon reported that the right rear tire was even rubbing during left turns.  Looks like the rear leaves are bent and need replacement, especially on that side.  I also noticed that the rear shocks were doing little to nothing, an observation easy to make when you’re able to watch your Jeep being driven around from outside it.

But the worst was the horrible noise that came from the front end near the end of the day.  As it turns out, one of the lockout hubs failed and became partially locked in.  The locking ring was intermittently chattering on the axle shaft.  We had to pull over and remove the hub.  Luckily I had tools in the Jeep.

Even with the problems we had, overall the shoot went very well, and we only have a few more passby’s to shoot.  We wanted to get them all done today, but the shadows were getting long and I was exhausted.

Next weekend… Joliet Prison!  Thanks again go to Carrie and Jessica for all the great behind-the-scenes shots they got. 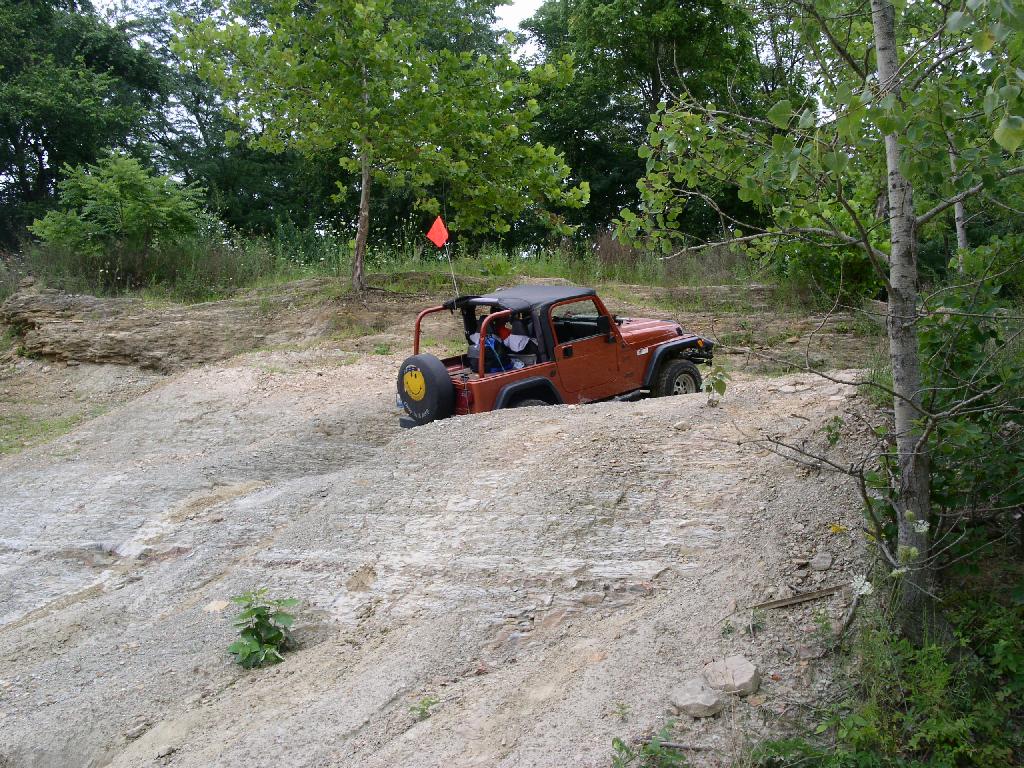