Rain in the morning turned out to be a sunny afternoon, and Jon and I were coincidentally both off work early.  After extensive research looking at photos of Bluesmobiles online (including the original model used when the car has to flip end over end), I got the star stencils for the doors printed out on the large-format printer at work.  Looking at the photos online, I found that the star actually has an inset circle, something that was part of the actual 70’s badge logo for the Mount Prospect Police Department.  Since I wasn’t sure exactly how big the star logo should be relative to the door, I printed a 14” and 16” version so we could hold them up to the door and pick what looked best.

Back at my house, we opted for the 14” star.  The 16” is probably closer to the size that was on the actual car, but as Jon pointed out, it’s more about the relative size of the star to the door, and for that the 14” seemed to look better.  I cut out the stencil and we shot a light and purposely spotty and uneven coat of flat black onto it.  15 minutes later it was dry and ready for “distressing”, which we did with steel wool.  We tried to make it look as close as possible to the real Bluesmobile.  I may hit them again later with some sandpaper.

Next we dug out my hard top, which had been sitting next to the garage for about 18 months.  There was some wood on top of it which was now full of worms, and there were several dozen spiders living inside it.  After a rinse-off we bolted it on the Jeep.  I haven’t used the top much since we did the cage on the Jeep, as it’s never really fit right since.  Luckily the doors do actually close, although they don’t fit right either. 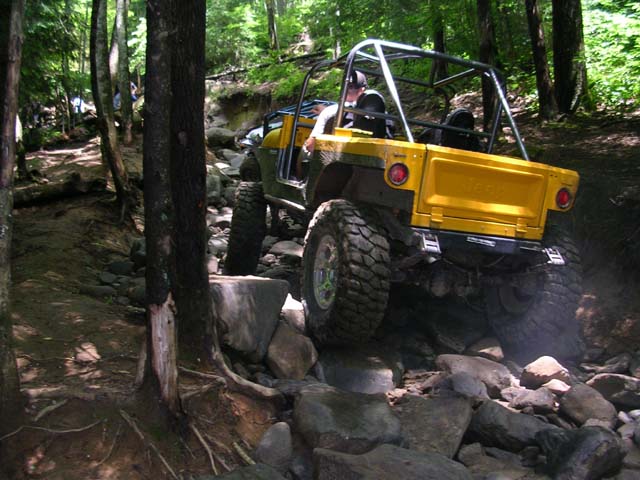