I consider the 2008 video to be the beginning of the “modern era” of MIJC videos.  The ’06 and ’07 videos were both admittedly a little last-minute, and the older ones (while they are decent pieces in their own right) lacked a bit of quality.  When Jon and I were exploring ideas for the video that year, a re-boot of the old “Knight Rider” TV series started on NBC.  It of course did not last long, but it was enough to spark our interest in another “black car” TV show.

I found an open and music from the original show (minus the voiceover) on YouTube, and Jon and I started looking at it shot-by-shot.  The opening shot, with K.I.T.T. screaming across the desert at dawn/dusk and going under the camera, was going to be difficult.  So Jon started searching for a spot where we could have a long, straight, dirt road along with a way to mount the camera so we could drive under it.  He found a spot in the farm acreage near the Route 9 bridge; a long dirt road with a low-slung railroad trestle bridge about halfway through it.  I also ordered a Knight Rider-style red “scanner” light for the front of the Jeep from JC Whitney.  It was definitely made in China, as evidenced by the directions.

I remember when Jon first drove me out there to show me the bridge, we had gotten out of his truck and were poking around the bridge when we saw police lights coming down the dirt road.  We thought we were busted (and we hadn’t even done anything yet), but as it turned out the cop was looking for a motorcycle accident that had just happened nearby.  He looked at us rather suspiciously then was on his way.

So we hatched a plan to come out at sunrise to shoot at the bridge, the time having the advantage of no traffic on the road as well as the lighting being close to what was used in the original open.  We met at my house while it was still dark one early Saturday morning in October and headed out to the location with a 12-foot 2×4, a screw gun and a stepladder.  We climbed up onto the bridge and screwed the board to the end of one of the railroad ties (I remember being nervous that a train was going to come screaming out of the darkness and kill us) and mounted the camera to the other end, which was hanging just high enough to clear the Jeep.  Jon made several runs and they all looked great.

There were a number of follow-shots we had to do, with a camera mounted at a low angle to shoot the Jeep while driving.  Jon and I came up with a mounting system for a small camera that attached to the tow hook under the front bumper of my Honda Civic, with another version to mount on the rear bumper.  I ran cables into the car to a small monitor I could watch while driving so I’d know what the shot looked like.  In practice I needed to use Carrie as a spotter to watch the monitor for me; it was too much to do that and drive at the same time.  We got great shots on the dirt road near the bridge, downtown at night, and on Main Street in Peoria coming down the big hill.

One of the problems we had on the dirt road was that between the vibrations and the dust, the small tape-based camera had some trouble laying down a solid video signal.  Microscopic pieces of dust can get between the tape and the video head and partially or completely prevent the signal from getting onto the tape.  But we were able to pull out enough usable video from the large number of takes we did to get the open done

Jon came up with a great idea to mimic the MIJC logo in real-life close to the railroad bridge.  There were a few corn crops on the corner of a field that looked nearly identical to our club logo.  So after shooting our dirt road follow-shots with the camera mount, we parked near the corner and waited for the sun to get a bit lower in the sky for that “golden” look to the lighting.

I remember a farmer who was harvesting crops nearby driving over to us in a combine to find out what we were doing… he had seen us going up and down the road driving close to each other and thought we had gotten in an accident and were waiting for the cops to show up.  When we told him what we were doing, he told us they have surveillance cameras installed near the railroad bridge to catch people dumping garbage nearby (there was quite a pile there).  We hoped we weren’t going to get a letter or a visit from the sheriff’s office.  The farmer left us to our business and we finished the shoot.  That logo treatment is now at the start all subsequent MIJC videos.

The shots of the Jeep were mostly done in the garage… the gearshift shifting itself was done from underneath, the gas pedal pressing down was done by manipulating the throttle cable under the hood.  The speedometer jumping up to only 40mph was done with a power drill attached to the speedometer cable; we tried several different drills but that was the fastest we could get it to go.

Since Sean Scheeler looked a lot like David Hasselhoff, we got him to dress the part and come over to my house for a few shots.  I didn’t realize he had a full beard, but the shots still turned out OK.  The shots of Sean were taken behind the old Peoria State Hospital which is a few blocks from my house.  While we were shooting, the then-new owner of the hospital came out to see what we were doing; he thought we were a film crew he was expecting from Chicago to shoot inside the hospital.  When we told him what we were shooting, he advised us to make sure we stayed in the street to avoid any problems with the police, then invited us inside for a tour of the building.  We ended up getting a really nice tour of the whole building from his daughter, which I recorded and included as an extra on the DVD.  I had never been inside and only knew some of the history, so it was pretty cool to walk around in there.  The owner has since opened up the building for different tour opportunities and overnight events around Halloween.

The voice used on the open was Stephen Moellering, a student of mine at the time with a great voice.  I included the recording session with him as another extra feature on the DVD.  I remember getting the bulk of the officer shots at Steve Vohs’ house with “no questions asked please”.

Since we went with a TV show for the theme, we decided to do some commercial-type shorts to break up the music videos.  The one for the MIJC video box set was done in the style of a Time-Life music collection commercial, which we shot at John Bruder’s house (with Matt Brown) on New Year’s Day 2008.  Bruder had some great lines in this piece and it turned out pretty funny.  My favorite is, “Order YOURS today!” as he glares over at Matt.  The voice for this spot was also done by Stephen Moellering.

The other two “commercials” were somewhat based on real arguments Jon and I had about what music to use in the MIJC videos over the years, although I will emphasize that NONE of the songs featured in these two pieces were ever even so much as SUGGESTED for an MIJC video.  We simply picked the dumbest, most unlikely songs we would ever have used.  The funny thing is that for each of these song excerpts, I had to actually edit some trip photos and videos to fit them.  My personal favorite was Air Supply’s “All Out Of Love”, complete with defocused, slow-motion clips.  That also got the biggest laugh at the annual dinner.

By the way, using all clips and photos from Tom Evans for “We Built This City” by (Jefferson) Starship is a reference to him continually playing that song on several trips.  I remember one trip down to Rockport where he kept keying up his CB mic to broadcast little pieces of it.  It still makes me laugh thinking about it.

The songs in the ’08 video are Van Halen’s “Unchained”, “Don’t Tell Me You Love Me” by Night Ranger (that was my favorite from this video), “She Sells Sanctuary” by The Cult, and “Dirty Deeds” by AC/DC.  Matt Brown’s “ke-tunk ke-tunk ke-tunk” description of his broken front CV joint was immortalized near the end of the Night Ranger video, repeated again in an all-Matt version of the MIJC logo treatment at the very end of the credits.

The credits feature the funniest outtakes edited to Herbert Chappell’s “The Gonk”, originally released in 1965 but made popular as the backing music for the credits of 1978’s Dawn Of The Dead, one of the best zombie movies of all time directed by the great George Romero.  The song has since been inextricably tied to all things zombie-related, but it’s a great silly piece for our outtakes.

That’s about all I remember from this one.  Use the player below to watch the video below.  Also take a look at the side-by-side open, which is in the next player down. 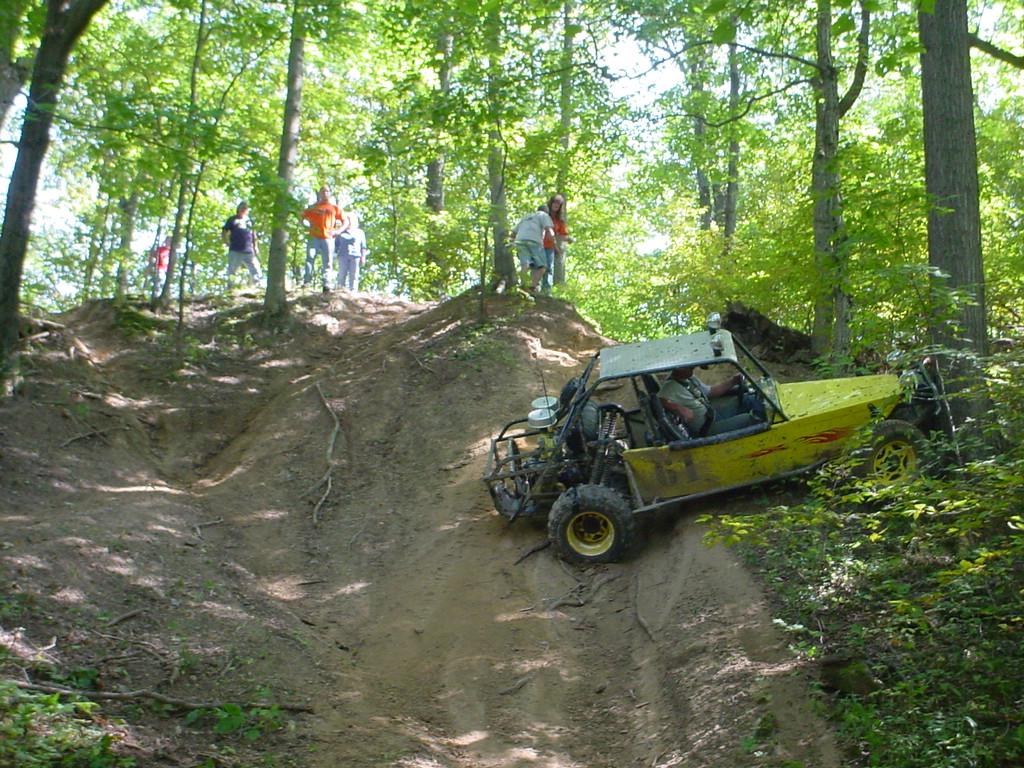