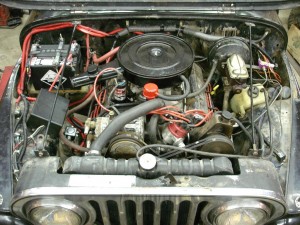 I have a few miscellaneous loose ends to tie up, like a distributor clamp that doesn’t want to tighten down and a temp gauge that’s suddenly reading 220 when the engine hasn’t been started in days.  But the swap is more or less done and I’ve even taken it for a drive.

With some help from Frank (OK he pretty much did it), the transmission and skid plate ended up bolting right back into their original holes.  I guess the geometry of the engine still being tilted down a bit was throwing me on the positioning.  Also, Frank suggested loosening the transmission mount bolts, allowing the skid plate to shift forward slightly.  So no major mods were necessary.

All the little things that needed doing are now done.  Chief among them was an automatic transmission kickdown cable I got from Summit Racing.  The inline-6 had a factory kickdown linkage between the carb and transmission.  Since I didn’t have a source for a factory setup, I went with the cable.  This is a lot less complicated and will work in just about any setup.  I actually didn’t even need to adjust it after installing it, but there are provisions for adjusting it at both ends.  Here’s a shot of the carb end; it’s the lower cable.

Wiring the new motor turned into a bigger job because I opted to clean up some of the wiring that was already there.  Once again the Internet came to the rescue, providing a wiring diagram for the Mallory distributor that came with the motor.  One of the things I learned from the documentation (and for once, NOT the hard way) was that the distributor requires the use of a ballast resistor on the coil, or you’ll eventually burn out the ignition module inside the distributor.  Some coils have one built in, but the MSD unit I have does not, so I ordered a resistor from O’Reilly.  Good thing I checked.

Since the “brain” is inside the distributor, wiring was pretty easy: positive, ground, and coil.  But it did take some time extending the old wires to new locations and running the necessary new wires.  I wanted to make sure the wires to the distributor were able to be disconnected in case it had to come back out.

The exhaust is also done.  I was able to cut up an old Y-pipe and use that for the downtubes off the manifold with only a little modification.  I used 2″ straight pipe and some 180-degree mandrel bends I bought online to piece everything together.  The only tough part was doing an S-curve around the rear shock to sneak the passenger side exhaust out the back between the gas tank and frame rail.  I used a combination of welding and clamps so that everything could be removed if necessary.

I also did an H-pipe right behind the transfer case.  I know it really should be closer to the motor but I couldn’t find an easy way to do that.

That’s pretty much it!  This will be the last post in this project.  Got one of your own that you’re working on?  Shoot me an e-mail and tell your story.  Huge thanks to Jon, Frank, Fraser and Carrie for their help and support on this project.

Oh… there’s just one more thing (might take a moment to load).  Want to see it in person?  I’ll see you at the Louie Louie Parade! 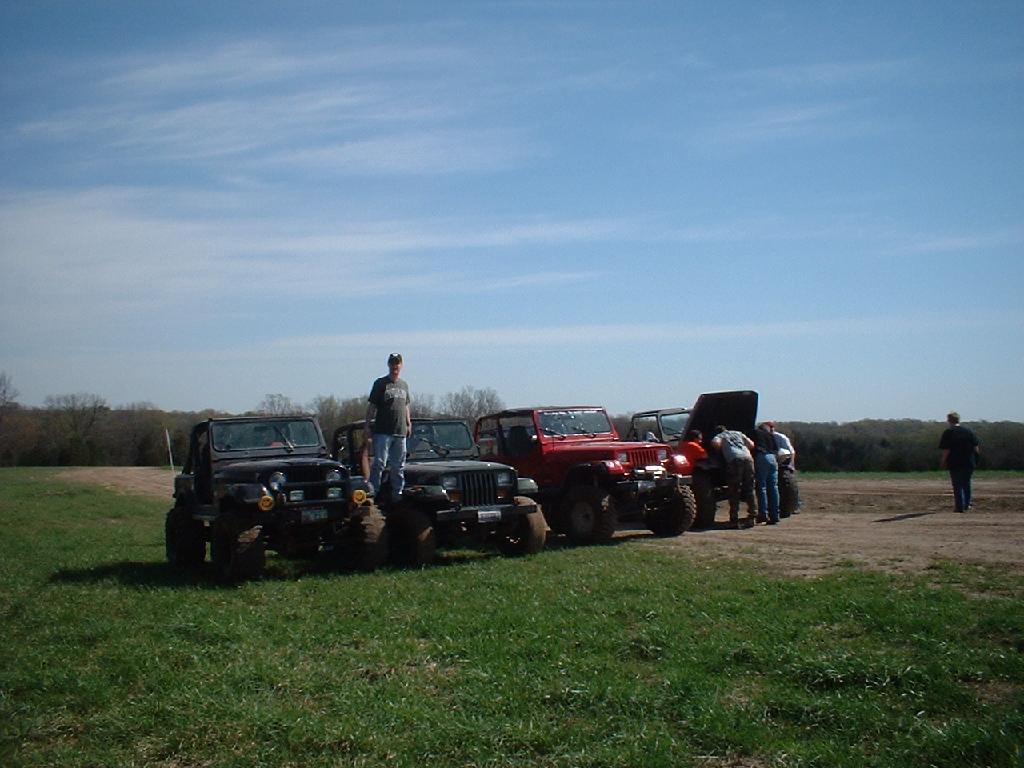