I got a deal on a V8-304 awhile back and although the 258’s performance improved quite a bit after finding and fixing a problem in the carburetor, you can’t beat the power or sound of a V8. The motor I got came with headers, an optical-pickup distributor, and a 4-barrel aluminum intake. 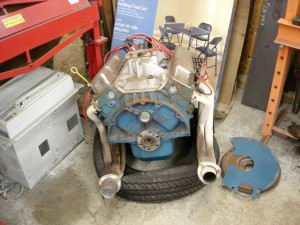 The first step I took was to put some smaller tires on the front of the CJ, and also let some air out of them. If you’re working on a lifted vehicle it’s a lot easier to reach stuff in the engine bay if you can lower it down. It also helps to add some ceiling clearance so you’re not maxing out the travel on your engine hoist. I didn’t want to put flat spots in my Boggers so I put some junk tires from my J-truck on the front and let most of the air out of them. There’s still room to roll underneath on a creeper. 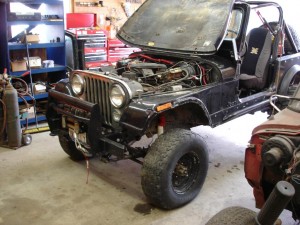 I weighed my options about what I needed to remove… obviously I had to disconnect everything from the motor, but I considered removing the front grille and possibly fenders too. In the end, I decided that would be a lot more work than was really necessary, in particular having to disconnect a lot of wiring from the inner fenders. I did drain and remove the radiator to avoid any damage to it during the swap and give some extra clearance.

Next came disconnecting everything else… heater and radiator hoses, ground wire, coil wires, supply and return fuel lines, distributor wires, throttle cable, plus the kickdown linkage and metal cooler lines for the automatic transmission. I also disconnected the power steering hoses and removed the external cooler I added last year, and removed the starter and alternator. Both will be reused with the new motor.

Last was the exhaust, the precious dual-exhaust setup that Jon and I worked so hard on. Luckily it was simply clamped together in a few key spots so removal was pretty easy.

It should be noted that my CJ has had all of the pollution control stuff removed… the maze of vacuum lines, check valves and wires present on a period-correct 258 would require a bit more effort to tag and remove. I also do not have a fan on the front of the motor; it would be best to remove that as well if you have one. 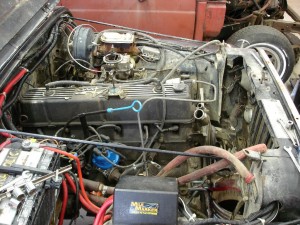 Since I have an automatic, next came the torque converter bolts. I removed the cover below the motor to expose the bolts. Jon turned the motor over with a wrench so each bolt could be exposed and removed. Motor mounts were next… I removed the nuts on the underside of the frame mounts and found that they had not been particularly tight. Story of my life, I guess. 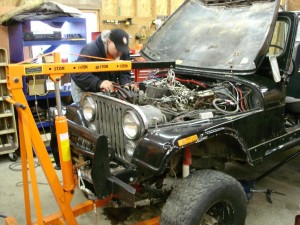 After hooking up the engine hoist to keep the motor from going anywhere, as well as supporting the bellhousing with a jack, last came the bellhousing bolts. On my setup there are 5 bolts total: larger bolts at both the 3 and 9 o’clock positions and three smaller ones across the top. After several attempts at reaching the top ones from inside the engine compartment, underneath the Jeep and even after removing the shifter plate between the seats, we decided to lower the transmission skid plate onto some longer bolts that we ran up into the frame. This made it a lot easier to access the bolts with a long socket extension from the shifter plate hole. 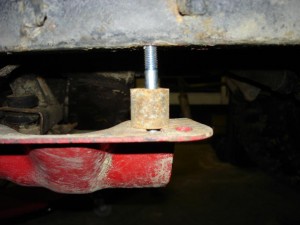 Once the last bolt was removed the engine was loose. We started raising it out of the compartment but soon found that we needed to remove the driver’s side motor mount from the frame. The exhaust headers were wrapped around the mount and there was no way to clear them from the mount. A few buzzes with the impact wrench and the engine was on its way out. The driver’s side motor mount (the rubber block part) was actually broken in half, and fell apart as we pulled the engine out. 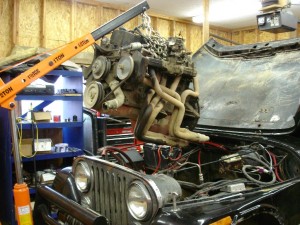 Next came test fitting the new engine. I still need to buy some parts before the final drop-in, but we wanted to see how it fit. 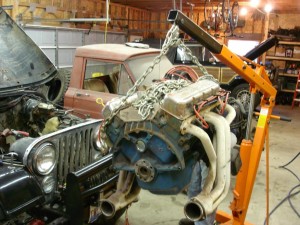 Soon after we began lowering it into place, it was clear that it was not going to go in without removing the exhaust headers. Once those were off we lowered it into place and using a few screwdrivers as alignment dowels, got the frame mounts (which were already on the new motor) bolted on. This also required a consult and (eventually) visit from Bill Gangloff, who offered some information he picked up during his recent swap about which holes on the frame to use for the V8 mounts.

It looks like we might need to nudge the tranny forward a bit to make this work… but I’ll save that for next time. 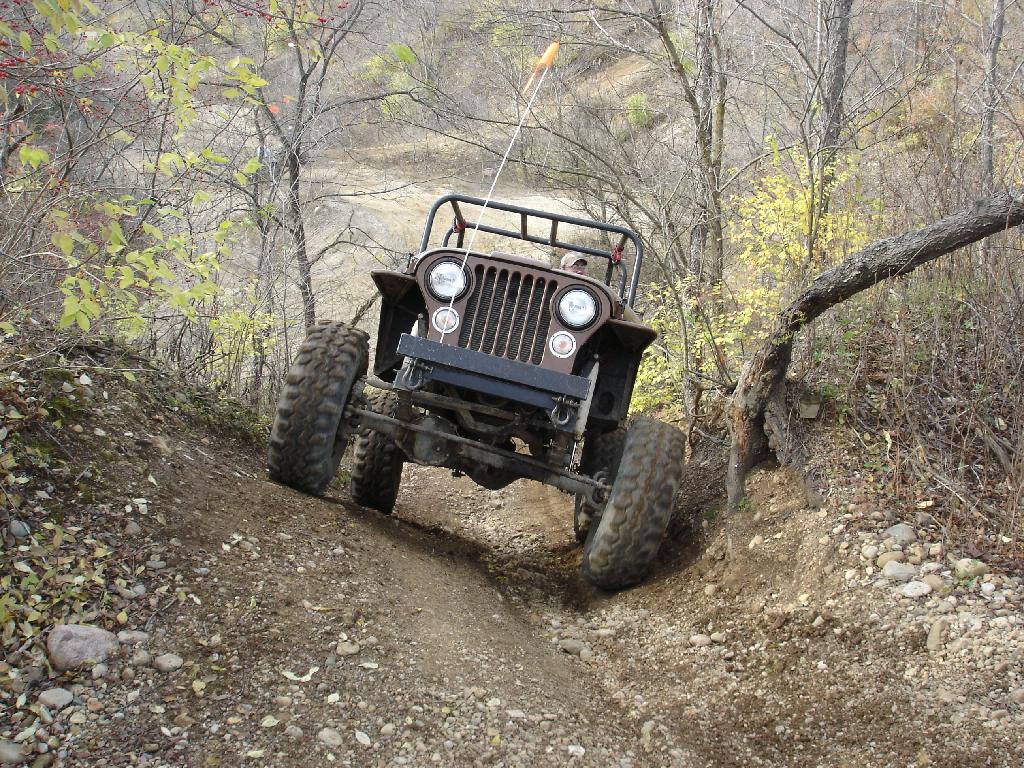